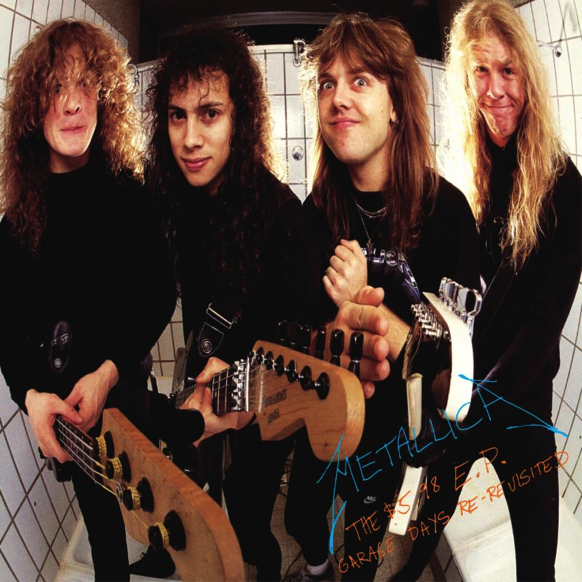 SAN FRANCISCO, CA – April 13, 2018 – Nearly three decades after going out of print, Metallica today releases a remastered version of The $5.98 EP – Garage Days Re-Revisited as part of their ongoing remasters series via their own Blackened Recordings label. Visit www.metallica.com to see all formats available for purchase.

Originally released over 30 years ago on August 21,1987, the collection features the band covering songs by early Metallica influencers such as Diamond Head, Holocaust, Killing Joke, Budgie, and The Misfits. The five songs from the EP were later included as a part of the 1998 multi-platinum release Garage, Inc., but the band felt it was time to bring it back in the original formats!

The EP is available in the following formats:

In honor of the re-release of “The $5.98 EP – Garage Days Re-Revisited”, James Hetfield shares a story about another garage – the Carlson Garage where Ride The Lightning and Master of Puppetswere written. James used some of the wood from the old Carlson Garage to build himself a new guitar. Watch him tell the story of how “Carl” came to be HERE.
ABOUT METALLICA
Metallica was formed in 1981 by drummer Lars Ulrich and guitarist and vocalist James Hetfield and in the nearly 37 years since, they’ve pretty much done it all. If you need to know more, loads of facts can be found on Wikipedia…and some of them are even true.  One more thing you should know: the European leg of their WorldWired tour will re-commence on February 26th in Munich, Germany, and continues through May before returning to North America on September 2nd in Madison, WI.

April 3, 2018 Bernard Cana General Announcements, New Release, On Tour, Videos Comments Off on KOBRA AND THE LOTUS Premiere Music Video For Japanese Version Of “Let Me Love You” via Loudwire

KOBRA AND THE LOTUS Premiere Music Video For Japanese Version Of “Let Me Love You” via Loudwire   New Album   “Prevail II” Coming April 27, 2018! Prevail II is the proverbial yang to the yin and continues right where KOBRA […]